I’ve been busy preparing pages for Superstition, the board book I’m assembling for Group 6 of BookArtObject, Edition 4. 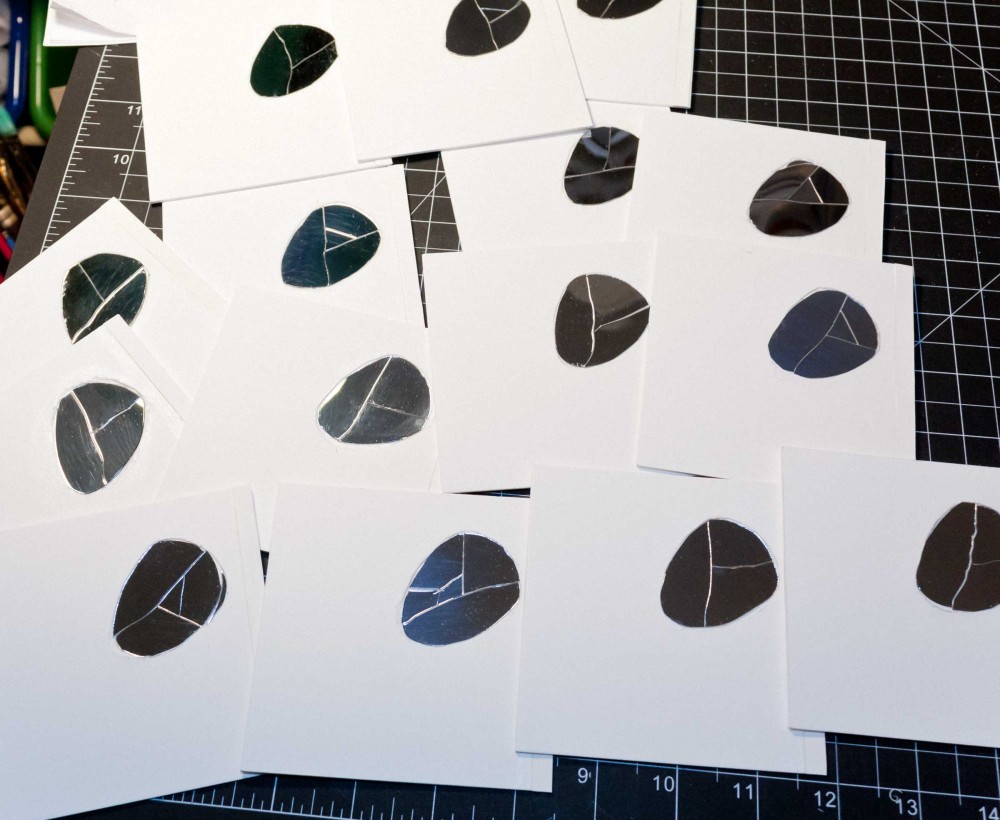 You don’t suppose I could be asking for trouble, do you, embedding 15 broken mirrors into board book pages?

A bit of old news for a few of you, but I’ve joined the international collective Book Art Object for their next edition. It’s rather ambitious this time around. Last I heard, about 50 people have signed up. We are being placed in groups of 8 each.

Each Book Art Object edition uses a literary piece as a starting point. The inspiration for Edition 4 is Sarah Bodman’s artist’s book An Exercise for Kurt Johannessen. More is explained at the BAO site and by Sarah, but the gist is that Johannessen, in his artist’s book Exercises, had suggested a task: write 100 short stories and bury them in a forest. So Sarah did. All that remains are the titles of her stories. Using this as our starting point, we each chose one for our own artist’s book. I chose title #87–Superstition.

We will each make an edition of at least 10 books–one for each in our group, plus one for Sarah Bodman, and an extra (or more, if we desire) for exhibiting.

I picked Superstition because the line “One should not dance around ladders nor sleep with black cats” popped into my head as I was looking at the list of titles. I thought it might have potential. After I signed up, it occurred to me that black cats are actually good luck in the UK, where at least one of these books is going to wind up. And I had no idea what sort of luck they are in Australia or Norway, where some of the others will be headed. Hmmm . . .

I posed this question on the BAO blog, and my fellow bookies have offered input. It turns out they are indeed bad luck in Norway (if one crosses your path, you should quickly spit 3 times to ward off the bad luck). But the opinions from Australia seem to be a bit ambivalent. Theoretically, I think they’re supposed to be good luck in Australia, but I’ve been told that traditionally they are known to be bad luck as well. So… either this will turn into a treatise on the nature of black cats and the fortunes they bring depending upon country of origin, or I’ll have to come up with something else. I suspect I’d better come up with something else. I’m still jotting down ideas in my sketchbook.

At any rate, seeing as we recently survived a Friday 13th, this seemed like an appropriate time to mention Superstition. I hope you all had a relatively lucky 13th. Mine was mostly peaceful, aside from a large van backing into my car while I was sitting in it (fortunately, and surprisingly, no damage to me or the car). Perhaps the two black cats waiting for me at home have distant British relations, thus bringing me good luck and improving the outcome.