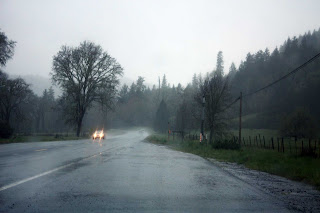 I trekked to the Bay Area last week. I’m still getting settled back in. I went to an evening workshop with Sara Burgess at the San Francisco Center for the Book. Her papercuttings are divine, and I figured mingling with some knife-happy, paper-crazy folks outside of my isolated corner in the Redwoods might be just the thing.

I also reconnected with a few old friends along the way that I don’t get to see nearly enough. This was good, but also sad. So many people I care about are going through such hard times–major economic insecurity, unemployment, frightening health stuff… 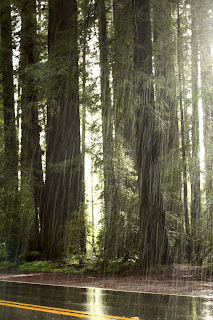 As for the workshop, my hands did not want to cooperate. Not to boast, but I used to be able to wield a scalpel or X-Acto with a fair amount of skill. Not so much anymore, alas. But the show-and-tell of Sara’s work alone made the night worth it. The books she makes from her all-white scherenschnitte-style papercuttings are exquisitely intricate. She fashions some of the cut pages into map folds that pop out when opened. She showed us one multi-layered carousel book that looked like delicate layers of lace. Unfortunately, there isn’t much of her cut paper work online, but she says that she plans to put more up on a site she has just started, White Papers Press. You can already see a few examples of her work’s complexity there. 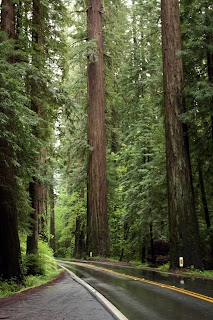 These snaps are from my drive home. I went slowly and stopped a lot on the way. The rain made it particularly scenic. 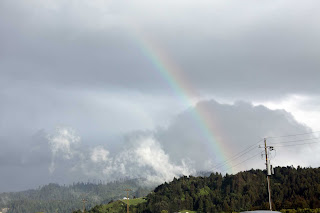 I’ve long had a soft spot for Hans Christian Andersen. He was a depressive who lived with very bad teeth at a time when dentistry wasn’t exactly what it is now. He lived in constant pain. He never really fit in wherever he was, and didn’t particularly care much for his home town. This wasn’t someone who wrote cheery stories, by and large. He was also something of a visionary. He once wrote about how he imagined the world in the year 2000, when Americans will fly to Europe in great airships with wings. They will telegraph their hotel reservations ahead, and come with guide books that will tell them what to see. And flying will be such a fast mode of transportation that the airships will be crowded and the people will be able to come see all the sights in a week before flying home again. He wrote this in the mid 19th C.

But in addition to writing, he was an obsessive paper cutter. He also made collages out of scraps, some of which look as modern as a Schwitters. According to the Odense City Museum:
To Hans Christian Andersen paper was not meant to be media for the written word only. Paper—it seems—represented the basis for his imaginative expressing. Throughout his life Hans Christian Andersen was an addict to paper. He wrote on it, he drew on it—and he used it 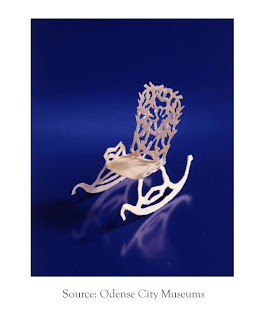 to cut in. Like the ancient expression that the form and art was hidden in the stone, only to be revealed by the sculptor, the poet used his material—the paper—to engrave, or rather to carve out his ideas with ink. And more radically he used his unexpected monstrous scissors to cut out the most elegant figures. (Odense City Museum)

The museum site has some pictures of his scherrenschnitte-style papercuttings, as well as his famous collage/decoupage screen. I also found this charming little paper rocking chair. Delightful, no?
And just to end on an appropriately surreal note, during my searches I discovered that the Irish Museum of Modern Art once had an exhibit called Cut-outs and Cut-ups: Hans Christian Andersen and William Seward Burroughs (yes, that William Burroughs).