Last Saturday I taught a paste paper workshop for NORBAG, our local book arts guild. Happily, they are all nice people and most of them are used to my eccentricities. Even so, I barely arrived in time for my own workshop(!) after a little paste (among others) malfunction. It wasn’t that the paste didn’t cook well–it did–it was that I hadn’t realized that if you make 24 times the usual amount of something, it takes longer to come to a simmer and can be a bit unwieldy. Silly me. I’d never taught this big a paste painting class before. 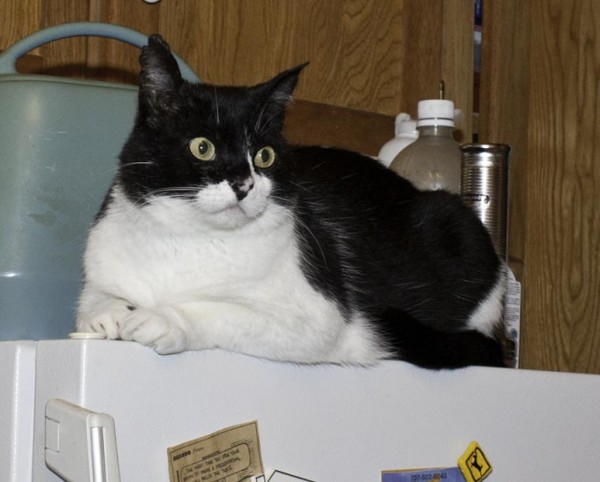 At some point during the kitchen proceedings Dominic the cat hopped up onto the refrigerator to get a better view. He looked positively spooked. I was awake (well… maybe more animated than awake) much earlier than usual, stirring a vat of paste and muttering things under my breath. Maybe in his earlier days as a stray he’d heard stories about strange women, cauldrons and cats…

I had fun thinking of things to bring to the workshop, in terms of tools. I found some interesting rollers at an educational supply place and at a ceramics supplier. I wanted the workshop to provide more than the usual chipboard comb and cheap paper. And I wanted it to be a little eccentric. I wanted to convey the joy of being experimental and using unusual things to make marks in paint. So, along with the commercial rollers and rubber dog combs, etc., I assembled a kit for everyone with some weird, and not quite so weird, finds from the hardware and dollar stores. It looked like something kids might get for craft time at a somewhat deranged day camp. Perfect! 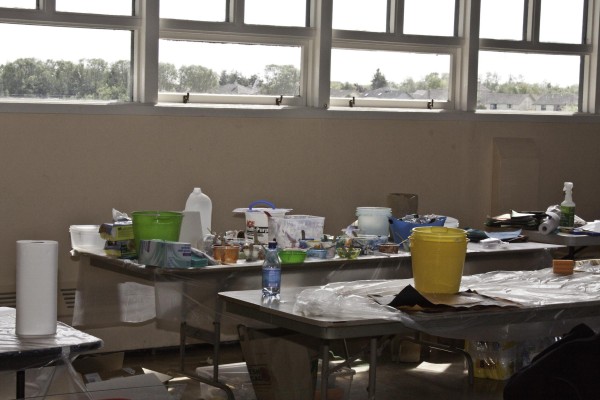 We were very fortunate that a church in town kindly allowed us to use their large facility. We not only had room to comfortably fit 24 and all their painting gear, but we also had yet another room in which to dry their output. Anyone who’s ever taken or taught a paste painting class knows how the amount of wet paper grows exponentially! This space was almost too good to be true.

Things were such a whirlwind that I neglected my bloggerly duties. I only remembered my camera after everyone was packing up and taking away their papers! Yike! So I hobbled around in a frenzy snapping pics of what was left. There were some really impressive papers there, far more than what I was able to get snaps of. I left with new ideas for patterns I’d like to try myself.

Unfortunately, I haven’t been able to identify the makers of all of the papers. If you were in the class and recognize yours and would like to be credited here, let me know.

And an especially huge thank you to everyone there who helped set up, lug around heavy tables and unload and load my car! It went well beyond the call of helping out.

PS In case you were wondering, I discovered it takes 4- 5 cups of cornstarch to make paste for 24. 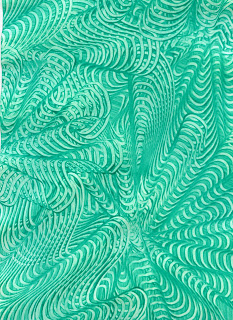 I went to a paste paper workshop last weekend. The instructor was nice and the company fun. I hadn’t had an extended stretch of paper decorating in a long time. I picked up a few new tips and tried a different way of making paste paper. It was enjoyable.

But, as it turned out, I wasn’t crazy about the way we were doing the papers. I’d originally learned to do paste painting on wet paper stretched taut on plexiglass. In this workshop we worked on dry paper. Judging from what I’ve read over the years, some people can do it this way. But I don’t seem to be one of them. The paper curled and I found the process exasperating. Furthermore, we were using methylcellulose. Again, a lot of people do it this way. I’ve even made some pleasing methylcellulose paste papers over the years. But I usually prefer to use some kind of starch-based paste for the better detail provided. Once the papers from the workshop had dried, I wound up with hardly any that I liked.

However, I still found the class valuable. It reminded me how much I used to like to decorate paper. A few days later when I was back in my own studio and had access to my stove, I boiled myself up some paste, pulled out my sheet of plexiglass and a tray of water, and treated myself to some paper decorating satisfaction. The designs you see here are details from a couple of those papers. 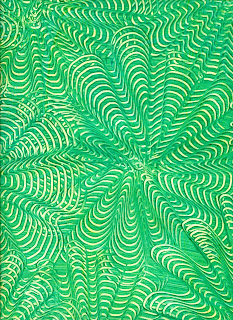 I’m highly gluten sensitive and have some weird allergies, so I have to make my own baked goods from scratch. The upside of this is I get to have on hand all kinds of ingredients that some people might find strange, including a variety of wheatless starches—tapioca, arrowroot, and amaranth—along with the ubiquitous corn. I’ve made paste out of them all, as well as out of rice flour and some rice starch that I’d actually bought for making paste rather than for baking. Most starch-based pastes are pretty similar in texture and workability, although the amaranth is a bit heavier and has a warm color cast to it and potato can be a bit hard to spread.

The canister of methylcellulose that I’ve been using for years, in fact, came from a gluten free food supply company. It was meant to be used as a gluten substitute in baking (although I’ve never used it for that, only for bookmaking and paper work). It was less expensive than any methylcellulose I’ve ever seen in an art store, yet seems to be exactly the same stuff. Out of curiosity when I was writing this post, I looked to see if that company still sold it (it’s not actually a popular gluten free additive for home cooks). Sadly, they do not, but I discovered some interesting facts about our old friend methylcel. In addition to being used by bookbinders and food manufacturers, it is widely used as an emulsifier and thickener in cosmetics and shampoos and is a common ingredient in pharmaceuticals. In fact, it is the “cel” in the laxative citrucel. Gelatin-free capsules are often made of it, as are the eyedrops that I use. Virologists and stem cell researchers use it in the lab. It is a base for creating fake slime and goo in movies (it was used in Ghostbusters, for instance). It is also, alas, used in the porn movie industry to simulate…things best not thought about.

Miraculous stuff, but nonetheless I prefer my starch-based painting mixtures. I have a further thought on paste painting, but it will have to wait until the next post.