I threatened to someone that I would post a picture of my work table. Now I’m getting around to it.

Along with it, some background. It’s been an interesting time. I have a show coming up next year, and need to be productive in the studio. I also have been dealing with health matters that make that difficult. I used to spend a lot of time cutting paper and creating intricate collages. Over the last decade or so, it became impossible to continue doing that. 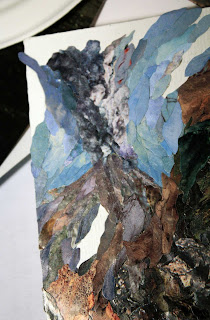 Getting a diagnosis has been a long struggle. One neurologist years ago told me that my problem was that I was an artist. He informed me that the same “fantastical imagination” that allowed me to create my artwork would lead me to have “a fantastical interpretation of my bodily sensations.” This neurologist also, by way of emphasizing how funny and crazy we artistic types are, told me that one of his patients was the musician and painter Don Van Vliet, popularly known as Captain Beefheart, who, incidentally, lived in my small town and died just a few days ago at the local hospital. To emphasize his point, the neurologist, while laughing, impersonated Don’s distinctive Multiple Sclerosis-related movement difficulties with what I’m sure he thought was a comic flourish. I didn’t know Don, but had heard that he had a reputation for fiercely defending his privacy. We wild and funny artistic types.

I was also told that I’d caused my painful problems myself through my artwork (too much fine hand motion, even though I had other symptoms that clearly had nothing to do with my arm pain). I am now careful to avoid mentioning art to medical people, lest it bias my care.

I could spend several web pages detailing cruelties from doctors and others. A friend once laughed at me and made it clear she thought I was a contemptible hypochondriac. Others haven’t said it to my face, but I suspect they’ve thought it.

This past week has been bittersweet. I finally found a decent specialist out of town. I now have a name to put to this (it’s basically M.S.). It’s degenerative, but the decline won’t be all that quick. But I can shelve any fantasies I might’ve still been harboring that things will get better.

I recently started a new medication that has helped with some of the more distressingly mind-numbing symptoms. A few days after starting it, I had a sudden urge to pull out some of my old collage things, including a little 4 x 6″ picture I hadn’t worked on in almost 6 years. The picture above is my chaotic worktable when I had it out. It was wonderful to be immersed in my old work again. My recent trip put a damper on my stamina, but I’m hoping to get back to it. I’ve also been working on some book-related projects (pictures to come).

I’m always torn over how much I should post about medical things. There is a sense that one should maintain one’s privacy, and other people’s medical problems are boring. On the other hand, I don’t like that vague feeling of stigma. Being ill or having a disease isn’t a source of shame. I’ve also long been using my experiences with the medical establishment as creative fodder. I can’t pretend this aspect of my life doesn’t exist.

(As I wrote out those last few lines there was a sudden massive flash of lightning and a thunderclap outside the window. A sign?)

5 thoughts on “My Fantastical Imagination”