Skip to content
My friend Robin Robin died on Friday. He’d been ill, but stable. This came as quite a shock.
Robin was an incredible commercial and portrait photographer with a career that included long stints in Los Angeles and Paris. We met after I’d had a bad experience with another local commercial photographer. Finding someone who really knew how to take professional quality larger format transparencies of artwork in this rural place was difficult. The transparencies were a necessity so I could get images of my paper mosaic collages reproduced. My work also has a glossy sheen to it that makes it difficult to photograph. I hired Robin to retake all of the 4 x 5s of my collage artwork. He did a stellar job of it. His wife Stephanie was his constant companion in the studio, as well as elsewhere, and we hit it off in a big way.

Without Robin’s quality transparencies, I likely could not have kept my work with the Bridgeman Art Library. When I had my last solo show, Robin showed up, tripod in hand, to get pictures of the gallery. It was Stephanie who, indirectly, led me to get involved with the book arts world. They both have had a huge impact on my life here. They have also simply been good friends.

A few years ago, Robin had an idea for a photography show at the local museum (if you click the link, scroll down to February). He wanted to do portraits of local artists. He wanted me to be one of them. The day of the shoot, he had Stephanie sit near me as he took the photos. As I’m sure he knew we would, we got each other in hysterics laughing (I remember I was telling her about my fantasy plastic lawn ornament, a mating turkey decoy — don’t ask how we wound up there). As soon as I started gasping with laughter, he started snapping. Dang him. Then I learned further details about the show. He was planning to make the portraits wall-sized. “Robin,” I nearly screamed, “you didn’t tell me you wanted to be f’ing Chuck Close!” Grudgingly, I had to admit they were the best pictures I’d ever seen of myself. Robin let me have copies of the proofs to use for promo purposes and whatnot. 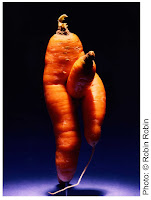 One day a few years ago I was fishing some locally grown carrots out of a bag. I pulled out a multi-legged mutant that was so funny my husband and I were nearly writhing in tears at the sight of it. I wanted a picture. Then I remembered we’d be seeing Robin and Stephanie the next day. Robin could get a better snapshot of it than I could.

I should’ve known better. Robin took it to his studio and did a set of portraits, even rubbing it with oil to give it a nice sheen. To this day I can’t look at a carrot without thinking of Robin’s photos. I joked with him that he could even make a carrot look sexy, but it wasn’t far from the truth. He was amazing with a camera. And he was the sort of person one would feel lucky to have for a friend. He’s going to be terribly missed.