This is only related to paper in a loose sense. I often used to use 35mm photos as source material for my collage work. I have quite a few photos in boxes, books and piles. Every once in a while I scan a few. These are of the comet Hale-Bopp from 1997. 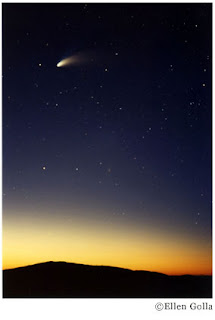 This one on the left was taken at a mountain pass off of Highway 299, a twisty road that heads east from here. I had gone inland, because here on the coast it’s too foggy most of the time to get a decent picture of something in the sky.

There were quite a few other people skywatching there as well. After I’d set up my tripod, a truck pulled up and parked behind me. Whenever it became dark enough between passing cars to take a picture, its driver would beam his headlights on me, ruining my exposure. I suspect he thought he was being helpful, providing light. I wanted to go tell him what he was really being, but felt intimidated. Eventually, though, I did manage to get a few snaps and was happy.

That general time when the comet was around provided a few strange memories. One night that March there was also a lunar eclipse. It was an unusually clear evening, and I was driving down the highway with my husband just after dark. The sides of the road were lined with parked cars where there normally would never be any. People stood all around staring up in a daze, gazing back and forth from one part of the sky to another, from the huge comet to the eclipse and back again. It looked like a scene from a Sci Fi flick. The aliens are landing. Or the Apocalypse is about to begin. 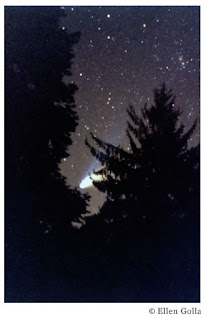 This picture on the right is especially for my friends D. and M., who weren’t yet born in ’97. D. loves comets and all things astronomical. This was taken in McKinleyville, not too far from where they live.

I happen to like comets too, although not with such a scientific bent. By coincidence the year before Hale-Bopp appeared, I did the paper mosaic collage Sleepers Awake (below). This comet was actually constructed from pictures of a galaxy from an old book. I cut them up into little bits and rearranged the bits into a comet.

I guess, in the end, I did manage to make this somehow be about paper. 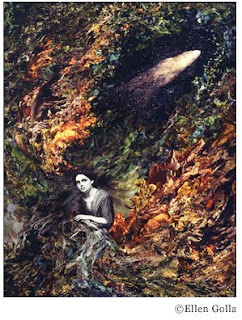