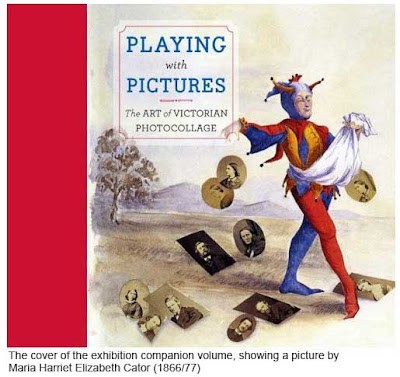 As I mentioned earlier, I’ve been looking at Mrs. Delany and Her Circle, the catalogue for a recent show about the 18th C. collagist that was at the Yale Center for British Art and is soon to be at Sir John Soane’s Museum in London (14 Feb – 1 May). Another exhibition catalogue I’ve been browsing is Playing with Pictures: the Art of Victorian Photocollage. The related show started at the Art Institute of Chicago, and is currently at the Metropolitan Museum of Art in NY through May 9. The book is quite enjoyable. I wish I could see the exhibition, which was just favorably reviewed by Roberta Smith in the NY Times. She says:

Breakthroughs aren’t always all they’re cracked up to be. Collage, one of the riverheads of modernism, is usually thought to have been introduced around 1912, when Braque and Picasso began gluing pieces of newsprint and wallpaper to their Cubist drawings. But what if it turns out that at least one form of collage was practiced decades earlier, not in Paris in the teens but in Victorian England in the 1880s and ’70s? And not by ambitious your-body-my-art macho geniuses but by women at the highest reaches of society, including the Royal family?

She ends the review by noting how modern the concepts behind so many of the pictures in the exhibit look. Many are strikingly reminiscent of work by well-regarded artists of the later 20th C. through today. “May this exhibition serve as a reminder that the most interesting thing about such distinctions [between the Victorian works and modern fine art] may turn out to be the inevitability with which they fray, as more kinds of visual play, by women and others, comes to light.” 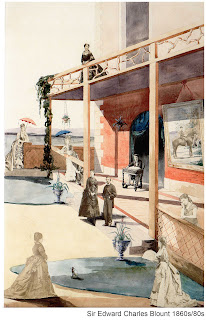 Well-promoted exhibitions such as this make me hopeful that perhaps, finally, we’ll get rid of the irritating notion that Picasso and Braque invented collage.