It was in the mid 1990s and we were getting ready for a trip to the UK. As I compiled a list of places I’d hoped to visit, I showed my husband a picture of one of Mary Delany’s 18th C. “paper mosaics” (as she called them) in an old book. How nice, I said, if it turned out that I got to see one at the British Museum (which houses her work). He, a university researcher, told me to write to the British Museum and request to see the collection. I think I laughed. I had no academic affiliation. But I wrote anyway. They replied that I should call to arrange an appointment after I’d arrived in the UK, and to be sure to bring my passport when I came to the Students’ Room in the Department of Prints and Drawings. 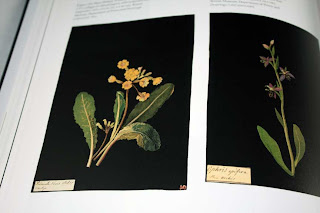 I’d expected to spend a couple of hours looking at the Delanys. Given the context in which I’d only ever seen pictures of her work — old black and white crafts books and the like — I’d been under the impression that the paper mosaics were quaint little flower pictures — probably a curiosity, really.

Then I saw them in person. I was astonished by their intricacy and ingenuity. They had just the right kind of balance that collage work should have. They weren’t pictures of flowers that happened to be done in cut paper, but, rather, the cut paper aspect was an integral part of their being. It provided a texture and blending of space and a sculptural element that another medium simply could not provide. How, I wondered, could these amazing, botanically accurate plant portraits in paper not be given more credit for their place in the history of collage?

But then again work in paper, in general, has traditionally never been taken all that seriously in the art world. It has been considered the stuff of commercial displays and folk crafts, unless, of course, it was taken up as a side venture by an established male painter, á la Picasso or Matisse. Then it’s been innovative. If it was done by an 18th C. female amateur and the subject matter was flowers…

What was originally supposed to have been an hour or two in the Students’ Room turned, instead, into days of complete immersion in the Mary Delany collection. It was hard to pull myself from these incredible bits of cutting and pasting history.

And, it should be noted, history is a key word here. Mary Delany herself was an interesting person. She was an 18th Century aristocrat who knew the King and Queen and their family. She mingled in circles with Handel and Swift, among others. The letters she wrote have been collected and published and are famed to this day. Many of the paper mosaics have, I discovered, notations on the back recording events that occurred as she worked on each piece. These include such things as visits from members of the Royal Family. These dated to around when the American Revolution was happening. She began to make the paper mosaics when she was 72, and continued until her eyesight failed ten years later. She made nearly 1,000 of them. 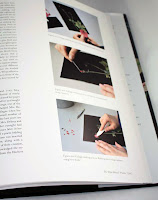 Fashions change, in art and opinion, and these days I’m beginning to feel vindicated. Mrs. Delany’s reputation in collage, and, indeed, the status of art made from paper in general, is rising. I’ve been enjoying the recently released — and rather lush –companion book/catalogue for Mrs. Delany and Her Circle, an exhibit that ended this month at the Yale Center for British Art.

What a joy it is to read lavishly illustrated, serious essays about Mrs. Delany’s place in paper art history. Among other things, it includes chapters devoted to the technical aspects of how the collages were made, including analyses of the papers and tools she used. It also includes top-notch reproductions of her work, not just of the collages, but of her drawings and of the embroidered court dress she made as well.

The dedication in Mrs. Delany and Her Circle is to Ruth Hayden, a descendent of Mary Delany’s sister and the author of another recommended book, Mrs. Delany: Her Life and Her Flowers.