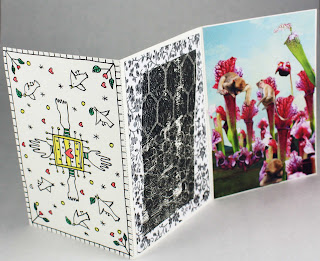 A while back I was sent an intriguing call for entries for an international mail art project that Helen Allsebrook was organizing in Bristol, England. I decided to sign up. Several weeks passed and I forgot about it. Then a mysterious packet arrived at my post office. It was from Bristol. 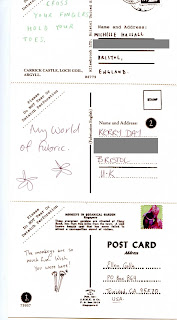 The format turned out to be a set of three postcards to be completed by sets of participants. The first person chooses a postcard to do, then passes it on to the next person on the list, who then picks one of the remaining two cards to work on. The third person finishes up and sends the accordion of postcards back to Helen, who will be combining all the submissions into an April exhibit at the University of the West of England. The show might, after that, be traveling to Rochester, New York.

I was the third person of my group, the last to get the cards. The back side of my postcard came preprinted with a text about monkeys in a botanical garden:

“Monkeys in Botanical Garden…These evergreen gardens are situated at Cluny Road, less than two miles from the town. A well known beauty spot that has never failed to attract a cosmopolitan crowd of visitors.”
Since my own garden happens to be carnivorous, that is what came to mind. It was to be a collage using, partly, inkjet printouts of stock pics and my own photos. Then my printer died. This must be something karmic to do with me and international art projects based in Bristol. My last two printers each went gears up while printing out bookmarks for the Bristol-based Bookmarks VI and VII. That last printer fiasco happened a mere 5 months ago. 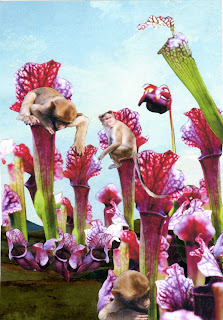 And so, I spent a hunk of the last week waiting for a new printer. In the end, it was fun. I look forward to seeing pictures of the resulting show (or two). Thanks to Helen for organizing this massive endeavor involving 240 participants. She also passed along a few links to others who’ve posted stuff about their submissions: Debra James Percival in Ottawa, Jackie Batey of Damp Flat Books in Brighton, Steve Hanson in Wales, and Rose Enright in London.