Finally, I’ve been able to spend a little bit of time here and there in the studio. After a longish period of not being able to do much, I’m trying to get caught up on some projects. For one, I’m completing a couple more copies of the Literary Cure (pictured at right). This particular small edition seems to be developing a following. I hadn’t realized that the concept of literature as pharmaceutical would resonate so well with others.

Here are some mini book blocks drying while clamped in small clothespins. They will be trimmed down and have covers added later. 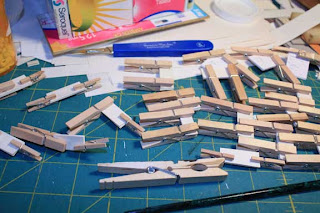 Then they will eventually be put in capsules. Here’s another example of what the finished encapsulated books  look like. 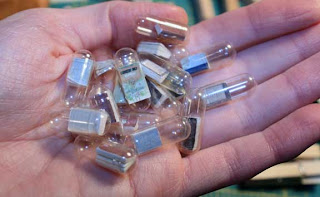 There are also little book-like items with printing on them that are clamped and drying with the others (in the picture before last). They are miniature prescription pads for a pharmaceutical shrine I’m finishing up. 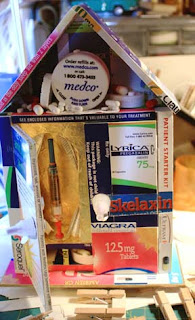 This is a sneak peek through one open side. Better pics of this will appear in a few days, hopefully photographed well enough so that you’ll be able to appreciate the gold-leafed interior and offerings.

And while I’m at my messy worktable, I’ll show a couple of my favorite tools that are sitting here. Top left is an ergonomically shaped teflon folder. It makes folding papers so much easier. The blue item is my British scalpel handle, which makes grasping the scalpel easier. In general, I prefer working with scalpels rather than craft knives. 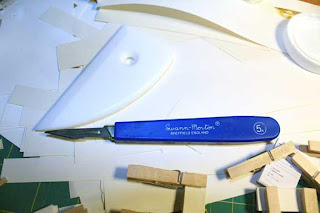