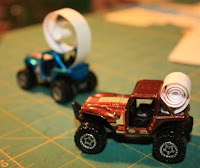 2 thoughts on “Wheels for Big and Small”