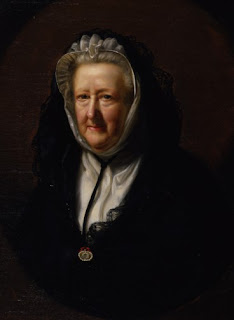 Art historians annoy me. Nothing personal if you happen to be one, mind you. It’s just that I get ticked off whenever I read an official art history version of how collage came to be. The Cubists, we are told, invented collage. When Picasso and Braque decided to paste some scraps to their paintings, this became a brilliant revelation that changed the course of modern art. Bleh. People had been doing things, some of it quite interesting, with cut paper for centuries before the Cubists. But generally these people were women or peasants or their day jobs didn’t involve working in a traditionally accepted fine art medium such as oil paint, so they don’t count.
The Georgian aristocrat Mrs. Mary Delany (1700-1788) was one of those interesting characters in collage history. I wrote about her on my website:

Beginning at age 72 and continuing for ten years until her eyesight began to fail, she created almost 1,000 botanical illustrations from cut paper. Her pictures were made with incredibly intricate detail. She would cut out with exact precision each tiny detail of a plant—individual stamens, bits of pollen, cactus spines… She called her works “Paper Mosaicks.”

One of the great joys of my life was getting to study a majority of these in the Department of Prints and Drawings at the British Museum. They have now scanned the entire collection of nearly 1,000 of these works and made it available online.

And while I was browsing on the web, I discovered that the Yale Center for British Art is currently having a show about her. It even got a mention on a NY Times blog, and a nice review of it was in the Hartford Courant [update–since deleted]. It ends by saying “…Delany, in her quiet way, continues to influence artists hundreds of years later.” She certainly has influenced me.