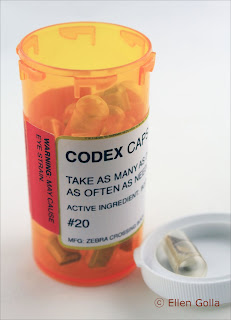 I feel as if I am returning back to the land of the living. My original intention for this blog had been to focus on paper and book art to the exclusion of more mundane personal stuff, but I’ve been finding that hard to do. There is just too much overlap between what goes on with me and what I wind up doing (or not doing) in my work space.

Actually, when I set this thing up, I hadn’t planned to let anyone even know that I was doing it. I’d thought I’d just create a little anonymous spot on the web where I could motivate myself by writing about projects I was thinking about and about miscellaneous paper-related discoveries I’d made online. If anyone actually stumbled upon it and kept reading, swell. But I wasn’t aiming to share my life. Unbloggerly of me, I know, but that was my thinking.
Then, a funny thing happened. When I was doing the bookmarks recently, I had to put my info on the back of them. And, to my surprise, I found myself putting this blog address on the back. I’ve been using the Paper Chipmunk name as the imprint for my book work. I guess I’m embracing my inner chipmunk. And sharing my life…
In spite of a show coming up soon with the book arts guild I belong to, I haven’t been able to do much of anything for months. My health matters have been getting worse and worse. Not to sound melodramatic, but I’d reached the point where I was seriously pondering “my affairs.” As in knowing deep down the time had come to damn well get them in order, however one is supposed to tidy up such things. But I felt too unwell to even do much of that. The scariest part was nobody could really offer much of an opinion what was wrong. Some major endocrine stuff, among other things, was happening, but of a sort that should be controlled by taking artificial replacements from pill bottles. However, it didn’t seem to be working very well. And doctors’ patience runs out when answers don’t come easily. I felt like I was slowly dying, quite literally. My MD was probably hoping I’d be sucked up by aliens on my way home, never to reappear.
Then an amazing thing happened. My pharmacy was going to switch my hormone replacement with another generic brand. I have allergies to some ingredients in pills, and this new one had some questionable things in it. So, feeling annoyed that I was now going to have to pay a lot more for my meds, I grudgingly went on the name brand version of my rather common drug, hydrocortisone. Within half a day of switching brands, I felt better than I’d felt in a long time. People I hardly know have been stopping me to tell me how much better I look. Even the constant pain I live with, something that’s not supposed to be related, became a bit more controllable. The change has been remarkable.
I’m sharing my rather personal medical saga as a sort of public service. If your medication doesn’t seem to be properly controlling your problem as well as you think it should be, it might be the brand of your pills. This is actually not the first outrageous generic medication incident my family has suffered from. I’m discovering it’s a common occurrence. The ever-expanding generic drug industry seems to be largely a racket.
However, in celebration of feeling alive again, and in honor of pills, I have made a bottle of a pharmaceutical I am calling Codex. Why read when you can take your books in pill form? Each capsule contains a miniature perfect bound book. If things remain controlled, over the next year I plan to make an edition of 5 bottles of Codex. Or, rather, Paper Chipmunk Press will be issuing bottles of Codex… 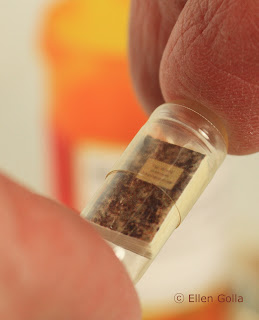 As an aside, I digitally designed several of the miniature book covers. Although I knew they were going to be shrunk down too small to be legible, I had great fun coming up with faux titles. A few: Iatrogenic Horror: a Novel; Arts and Crafts for Phlebotomists; Doctors Kill… I think you get the idea.

1 thought on “Life from a Pill Bottle”