Skip to content
The other day I discovered that one of my old Underground paper mosaic collages is being used in an interesting online exhibition at the musée historique environnement urbain.
This link will take you to the beginning of the London section of the virtual exhibit. If you roll your mouse over the pictures and follow the arrow that appears on the right, you’ll eventually get to All Trains Go to King’s Cross St. Pancras. It’s being used to illustrate the tube-like nature of the deep level tunnels. The main site  for the virtual musée (in English or en Français) has links to all kinds of exhibitions on aspects of urban life.
By way of background, the picture was based on a photo that I took several years ago at Manor House Station on the Piccadilly Line. The title comes from the announcement on the electronic sign. They’ve since “refurbished” the station. I haven’t seen the cleaned up version in person, although judging by the glossy, bright pictures, I suspect I wouldn’t actually like what they’ve done. 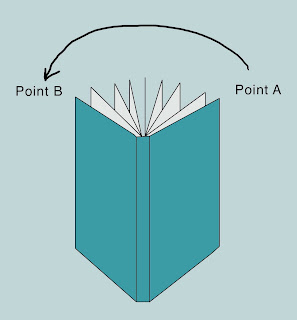 I’ve been pondering ways of conveying the progression of time and movement in books. I was recently re-skimming parts of Keith Smith’s Structure of the Visual Book. He talks about how the structures of artists’ books relate to those in “music, poetry, story-telling and cinema.” He then cautions:

Carryover of past concepts is often inappropriate… Revolutionary ideas must be realized when starting to work in a new medium. The basic problem in making books is approaching it as if it were many single pictures, and it is not . . . This error comes from working in one medium, and carrying over principles to a new process, rather than discovering what is unique about the new medium.

As someone who used to work largely in single pictures, this is something that I’ve found to be both exhilarating and vexing about making artist’s books.

I was listening to a talk that Bea Nettles gave at Duke University (thanks to a link posted on the Book Arts List). She mentioned how in one of her books she partly conveyed the slow, subtle process of aging by gradually transforming the background color of the book’s pages. As the book progresses and the subject grows older, each page becomes ever so subtly more purple. By the end, the viewer realizes that the pages have become deep purple, hinting at how a person almost imperceptibly ages from day to day, slowly evolving into an older person. Now that’s the sort of thing that makes a book unlike a painting.

Someone mentioned here recently that she’d tried to back silk with paper, but had problems. By coincidence, I just came across this video and thought perhaps it could be useful.

Volvelles are paper wheel charts with rotating parts. The modern ones, such as those reproduced in Jessica Helfand’s Reinventing the Wheel, are enjoyable. But there’s something so captivating about the ones from previous centuries that were incorporated into books. These were used for serious stuff like astronomy, medicine and fortune-telling. They were computing devices in their day. To think that the modern movable book has such exalted ancestry.

When I posted a picture recently of a volvelle from Petrus Apianus’s 1529 Cosmographia, it whetted my appetite for more. Here are a couple of other examples from the Cosmographia. 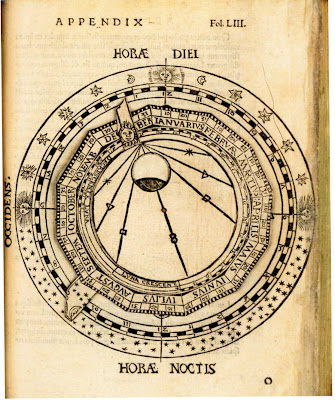 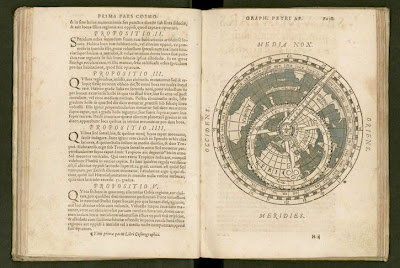 A spread from the Library of Congress website, showing the positions of the sun, moon and planets.
According to the Lambeth Palace Library Exhibition catalogue, Petrus Apianus (1495-1552) was a mathematician and a pioneer in astronomical and geographical instrumentation. The Cosmosgraphia was a European best-seller. It appeared over the next century in as many as 45 editions in 4 languages, printed in 7 cities by at least 18 printers. It contained four volvelles.

Here are a few links to historical volvelles:

The following page from the Astronomicum Caesareum by Petrus Apianus (1540) is thanks to the Wikipedia page on Volvelles: 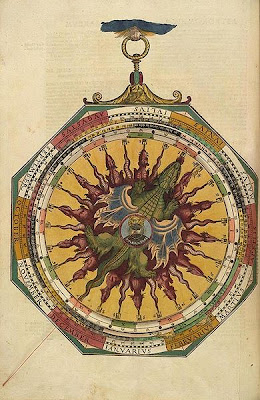 The following is a “cipher encoding machine” from around 1600, from an exhibition of manuscripts that was at the Getty: 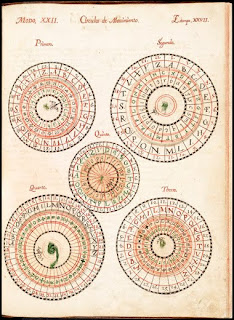 The University of Oklahoma has an example or two:
As well as the British Library:
Doesn’t it just make you want to start cutting and assembling circles (or at least drool over photos of old manuscripts)?

These all-white layered cut paper maps of rivers by Lauren Rosenthal are amazing (if you follow the link, click under projects to see more). 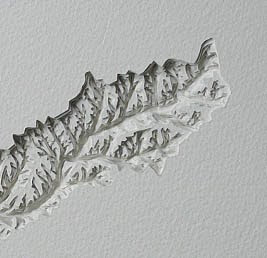 I like this guy’s bookmaking videos. Here he makes a jig for an embossed inset.

It was third in a series on making jigs for an accordion. Parts one and two are here. It’s interesting to see how people approach such things. 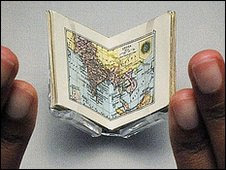 I’ve been pondering a potential project–a metaphorical atlas (for lack of a better description). I’ve long loved maps and map-like visuals, and have been wanting to use that kind of imagery in my artwork for as long as I can remember. I think the time is coming to do it as a book. We’ll see if anything materializes. For now, it’s mostly in the sketching and pondering phase.
What made me want to mention this was stumbling upon this exhibition review on the BBC news site. The British Library and the Royal Geographical Society are both currently putting on shows that focus on the artistic aspect of maps. One of the items they show is the miniature atlas above. 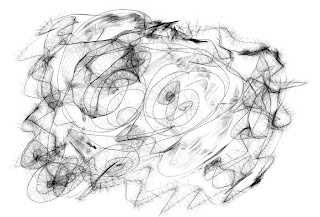 Warning: stay away from this site if you have a tendency to compulsively doodle. 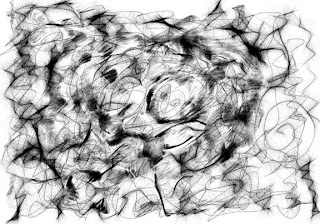