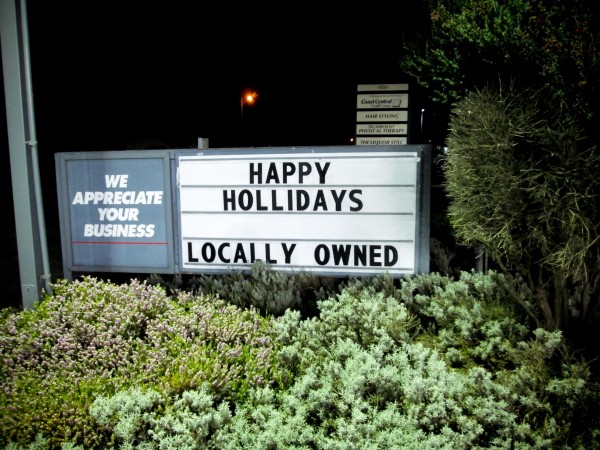 Now off to make some cranberry sauce and maybe glue a few BAO books. Whatever you’re all doing, I hope it’s happy. No matter how you spell it.


Here’s a peek at one of the finished mirrors set in its board book page. 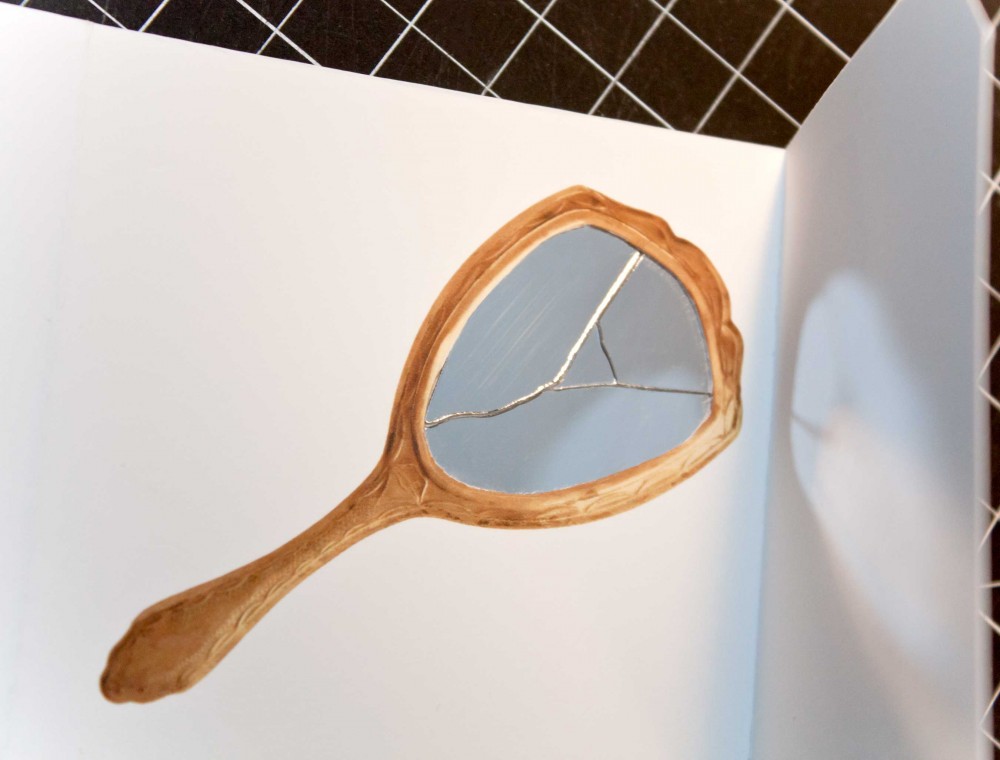 I’ve been discovering ways to make board books a little more efficiently. (One of the rewards of making an edition–by the time you’re done, you’ll really know how to make that structure! Not to mention you’ll also really know just about everything that can go wrong when making that structure. Alas.)

More on that soon… I’m going back to gluing pages. That is, assuming our electric stays on. We’re in the midst of a storm and the lights keep blinking. It might instead turn into a chilly night reading by flashlight. Ech. 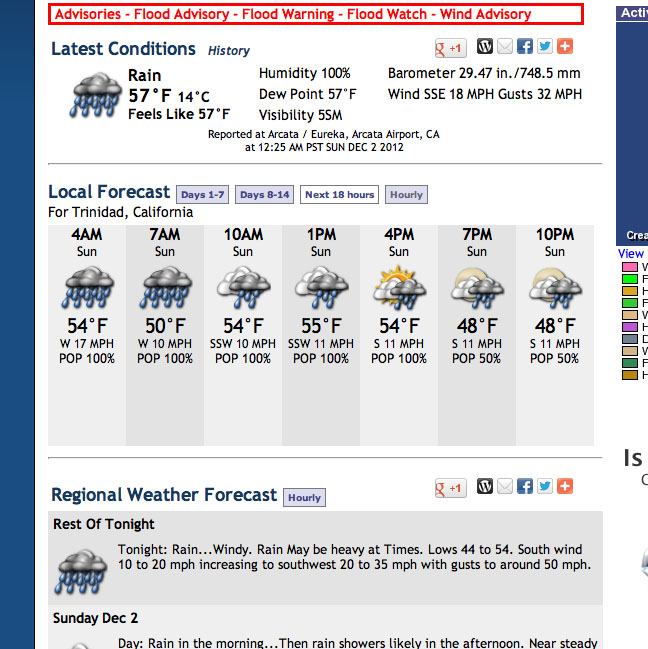 (Lest anyone worry, we’re not in a flood zone.) 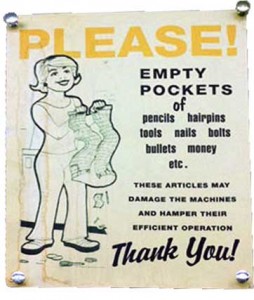 This sign used to hang in the local laundromat. I do my wash at home these days, but perhaps I should post my own friendly reminder above the washer and dryer.

Although I’d assume this isn’t quite as bad as doing the laundry with ammo, I’d think that putting a pocket full of scalpel blades through the wash isn’t a good idea either. 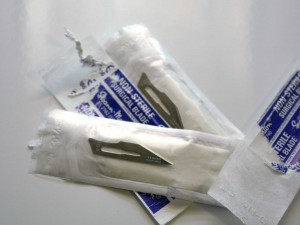 
Peter and Donna Thomas came wandering through Humboldt County in their gypsy wagon yesterday. It was a bit last minute and most of the local book arts folks were away at Focus on Book Arts north of the California border, but a small group of us met at the scenic Arcata Marsh for a little picnic. The weather had been pleasant and sunny for days. That ended just before the picnic.

But heck, who needs coffee when there’s such a nice bracing wind off the bay. The conversation and food were so enjoyable it hardly made a difference, and the downpour, fortunately, held off until after we’d finished eating.

Afterward we took shelter in the wagon, which was especially atmospheric with the rain pattering on the roof. Peter sang us a book arts song with his ukelele and we perused a display of their and their daughter Suzanne’s wonderful books. It was a delightful afternoon.


Days before the terrible earthquake in Japan, I’d had a conversation with a friend about the massive subduction quake that we are overdue for here in our part of the world. He’d taken a class from a famous geologist who specializes in earthquakes. He talked about how it will be around 9 on the Richter and how the shaking will go on for minutes, not seconds as in most earthquakes. The tsunami it will unleash will wipe out some of the lower-lying towns almost instantaneously. We will be cut off from the outside world for weeks afterward due to damaged highways and bridges, likely with no power and maybe no water. I expressed my desire to be long gone when this event occurs. The thought is too horrific to contemplate, even as we live every day with the knowledge that it could very well happen here at any time in the Cascadia Subduction Zone. And then…

When I moved to Humboldt County in the late 80s, I became friends with a woman who had two girls, the younger being 2 at the time. We were in the same anthropology class that required spending a chunk of the semester at the zoo watching the primates for a term project. I remember us meeting there. My friend spread out a blanket and we worked while the “baby” napped, then we took her around the zoo to look at the animals when we were done. While still a student I wound up living just behind them. We became good friends and kept in touch over the years. The toddler at the zoo is now a married university graduate. She’s incredibly smart, creative and quirky in all the best ways. And bilingual too.

She is currently living with her husband in northern Japan, working with a cultural exchange program. After the earthquake, there were a couple of tense days here in California as we waited for news. Even her friends in Japan started posting notes on Facebook, wondering if she was ok. She doesn’t live right on the coast, but isn’t that far from the epicenter. She’d mentioned visiting Sendai before. It was, to put it mildly, an unnerving experience.

At last, she was able to get a line out–she and her husband were ok!

I’ve been to Japan once, many years ago to Kyoto. I arrived not sure what I’d think of the place, and left enthralled. Thinking about what’s happening in that country now is painful.

Before the quake, I’d planned to briefly mention Japan in my next post. I have a link to something there that relates to a current project. Next time…


My local long-time friend Natalie is a fantastic ceramic artist. We recently had a discussion about kiln gods. Since I’m not a ceramicist, I wasn’t familiar with them. They are, it turns out, pieces that are made to be placed on the kiln as a sort of good luck offering for the firing. She’d recently made some talisman pieces based on this idea.

The other day on an impulsive whim, I walked into the Arcata Artisans Cooperative Gallery where she has her work and bought one that caught my eye. I figured a talisman to appease the arts gods might be just the thing I was needing.

Minutes later on my way back to the car, I stopped in at Northtown Books just down the street. As soon as I got through the door, they placed an order for a bunch of greeting cards of my old collages. The order covered the cost of my talisman.

I also like our independent bookstores. Humboldt folks take note: if you want something quickly, consider getting it locally. I recently placed a special order from Northtown in the early Saturday evening of a long holiday weekend. It arrived by Tuesday. This, in an isolated place where even “overnight” delivery often takes two nights. I don’t know how they do it. Plus, they are really nice people.

And if you happen to pop into Northtown in Arcata, or Eureka Books in Eureka (who, I should add, can also order things for you) my talisman suggests you check out the greeting cards, especially the ones with the mosaic collages on them, like this one here. . .


I’m going to be having a show next year at Eureka Books.

It isn’t happening for a while yet, but I’m bringing it up now because the bookshop was mentioned in the New York Times on Sunday. The author of the piece, Amy Stewart, is one of the co-owners. It’s a true, and funny, story involving the store and Humboldt County’s most famous agricultural export. 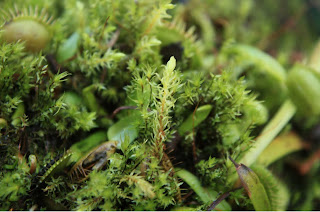 The soggy damp Northwest of California is a great place to grow bog-dwelling carnivorous plants (these are my babies). Even with global warming and our now noticeably drier summers, it generally stays wet enough to keep them happy. 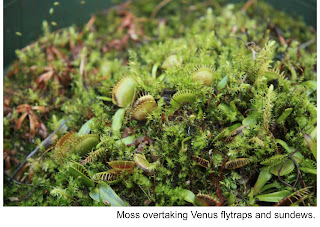 Unfortunately, there’s also another wet-loving organism that thrives in this climate. Moss. In particular, an invasive, nasty and vigorous moss that spontaneously emerges on the soil of my plants and takes over their pots. I pull it out. It comes back. Only more determined. I really hate this stuff. And it grows not just on my plants, but on everything–our cars, our roof, our walkways… Trust me. It’s not cockroaches that will survive nuclear annihilation. It’s invasive moss. 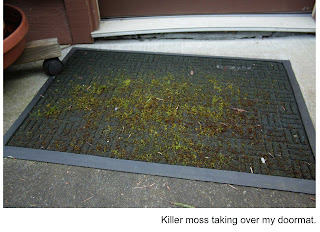 Several things spring to mind when I see this green plague. Some of it isn’t polite enough to repeat on this blog. But one thing I’d never thought is “People will pay to have this sent to them!”

I discovered that there are those with a more entrepreneurial mindset who bottle this stuff and sell it on places like Etsy.

I suppose this is why I’ll never be a financial success. I’m completely lacking that business gene. When I see killer moss choking my plants and taking over my home, my first thought isn’t “terrarium sales!” 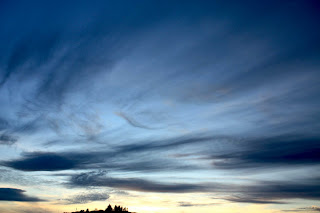 We had a 6.5 magnitude earthquake yesterday, centered to the south of us here in Humboldt County. Fortunately for us, we shook a lot and lost our electric for several hours, but there was no damage and nothing fell off the shelves here at home. People we know who are not that far to the south didn’t get off quite so lucky.

The photo above was taken at the seaside in the town I live near, Trinidad, about a week ago. This general area is scenic, but seismically scary. A few major tectonic plates converge here. Eighteen years ago we had a series of three major earthquakes over two days. It was the only time I’ve ever seen an entire house (the one I was living in) wag vigorously back and forth. I wound up with a deep appreciation for the flexible wooden buildings we have here in California (nothing, miraculously, broke in spite of that motion).

Our most recent event made the national news. This coverage [update: since removed] from the San Jose paper includes a couple of YouTube videos. One of these is like a Humboldt County joke–it shows a bunch of people standing around in the woods like stunned deer, wondering if a redwood will fall on them. Sigh.