I think this is the longest I’ve ever disappeared from the blog. I’m still around. I’ve even been mildly productive, I am happy to report.

The Handbook of Model-making for Set Designers, a recent discovery, is filled with all kinds of fun tips and suggestions for making small stuff with card stock and paper. I’d originally been making a staircase out of book board (something I’m still working on), but wound up suddenly deciding to fashion a tree out of wire and cover it in lokta paper, giving rise to this little book object. I also had some tiny polymer clay eggs sitting around from some previous thing, and so added a nest.

The text in back is, more or less, a stream-of-conscious bit of nonsense that mentions, among other things, a cat climbing a tree. It ends with “And the cat will climb down by the tips of his claws.”

This was inspired by seeing my cat Dominic climb a redwood the other day. He’d spied a bird way high up (redwoods, you might remember, are tall), and decided to go up after it. He made it to the first limb — still impressively high off the ground — which creaked precariously under him as the bird watched safely from above. I don’t know what the cat was thinking — that the bird would hop down onto the branch with him?

At any rate, I had fun putting together this little book object. Nothing like a little productivity to lift one’s mood! 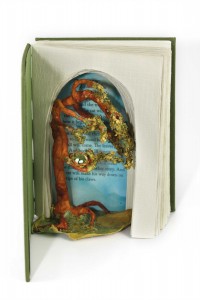 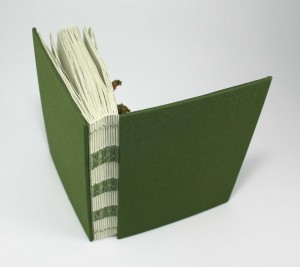 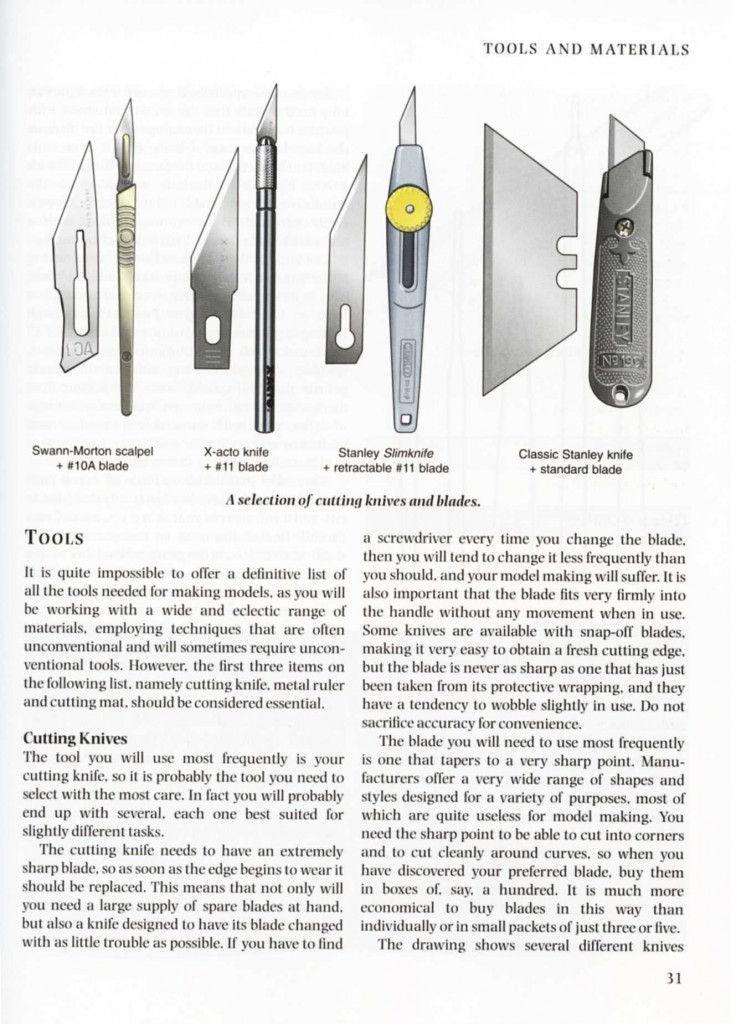 How can one not like a book that has pages on scalpels and knives? It even has a sidebar (not shown) outlining the history of X-Actos in the U.S. and scalpels in the U.K. (it’s a British book). 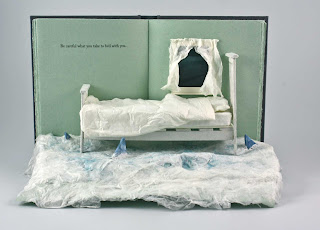 I couldn’t keep my hands off the sharks. The bottom just didn’t look quite right. So in a fit of industrious exuberance I added more. The next morning, I wished I hadn’t. It’s not awful. I just preferred the other version.

How ironic that I started this book/object before the situation I mentioned in my last post. Next time I get the urge to portray sharks circling something, I will take note.

Before I go further, I want to thank, from the bottom of my heart, my legitimate readers and friends for their support and encouragement. I’ve been deeply moved by the kind comments, messages and emails that I’ve received since I last posted. It’s been a bright spot during an otherwise dark time, and has meant a lot to me. Thank you.

On a happier note, I have a book project to share. I’ve finally been able to get back in the studio a bit, and have been on a Japanese paper binge. If you dip pieces of it into paste (in this case, rice starch paste) and remove the excess, you can form the  paper into almost anything. Leave it on waxed paper to dry, and you can have, for instance, miniature billowing drapes.

And what’s especially lovely is that it is non-toxic. I wouldn’t want to dip my bare hands in acrylic medium or PVA, but rice starch and distilled water? I feel like a kindergartner with something really cool and slimy.

I’ve had an idea for a sculptural book running through my head. “Be careful what you take to bed with you” will be the only text it will contain.

I’ve also been looking at books about miniatures and dolls’ houses. So I built a miniature bed. Or rather, half a bed. It’s going to sit on the open book, looking as if it were sticking out of it. Or at least that’s the idea.

Here’s the bed frame, which is made from book board, paste and Washi: 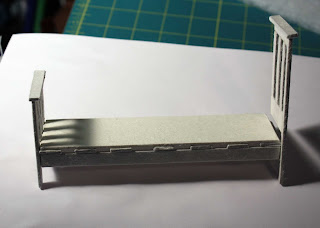 Here’s the bed after a mattress, pillow and blanket molded from Washi, foam, quilt batting, thread and paste was added. It has a stiff, papier maché-like texture: 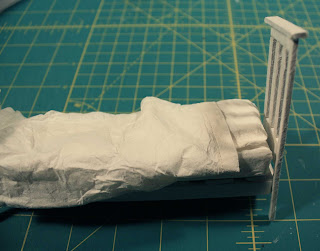 The book block has been sewn and is waiting to be cased in. The plan is to make a little paper sculpture monster or swimming sharks or something to put under the bed. I might also add walls or flooring from folded pieces of paper. I am allowing it to develop and let it suggest things to me. 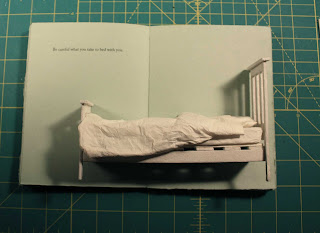 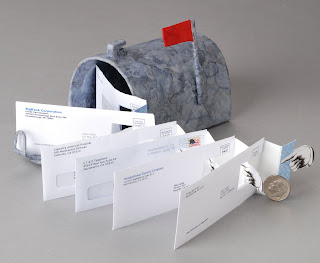 This is a cautionary tale. Consider carefully what you title your works. You don’t want to jinx yourself.

I mentioned in my last post that there was a story behind my 2008 entry to We Love Your Books. The theme for that show was “Re:” Any kind of subject based around a “re” word was suitable. I, in my questionable wisdom, chose to make a book object entitled Returned to Sender. This, for something that was going to require international shipping. You see the problem?
The book object itself was about bills. The full title was Returned to Sender (I Wish My Bills Could Be). It was an accordion of miniature parody bill envelopes, with nested flags cut through them of a finger pointing them back into the mailbox. To complement the American-style mailbox, I decided to portray the culture from this side of the Atlantic with my billing selections. One envelope, for instance, is from “Gigantica American Hospital” on Malpractice Parkway. 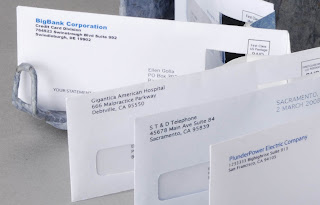 I finished my piece and mailed it off to arrive well before the deadline. There was also an optional group component that I decided to do as well, but I didn’t get that done as quickly as the book. Since I didn’t want to delay the important item, I mailed the book first. The optional group contribution, a paper-engineered tag, followed a few days later.

The book should have taken no more than a week and a half to get there. But more than two weeks later, it still hadn’t arrived. I received a puzzled email from one of the curators wondering if perhaps I’d misunderstood something? They’d received the little tag, but where was the book? I was mildly panicked at this point, but figured it was probably just sitting in customs. Hold tight, and they’ll release it soon.

But the book still did not arrive. The deadline for submissions came and went. The book could not be traced. It had vanished in the mail.

Then one day nearly a month later my husband went to our post office box. There was a package pickup slip for us. When he went to the window, the box containing Returned to Sender was brought out and handed to him.

Forty-five minutes of intense head scratching, computerized database checking, measuring, and postal formula analyzing followed… yet nobody could figure out why the box had mysteriously been returned. It had been properly packed. They were sure it had the right postage on it. Customs declaration was perfect.

The postmistress came out and joined the others scrutinizing the returned item. They all stayed past closing. Finally, someone found an obscure formula that stated if a parcel fell above a certain measurement in its circumference, regardless of its weight or other dimensions, it would belong to another, more costly mailing class. My box, they figured out, measured just slightly over this size. The people at our post office were flabbergasted. Apparently, some bureaucrat with a tape measure at the main sorting office in San Francisco had ascertained that my box was ever-so-slightly technically a teeny weeny bit above the official cutoff size, and had placed it aside in a pile for three weeks. Then, finally, it was returned for insufficient postage. At least this was all they could figure. They had never before seen anything like it. 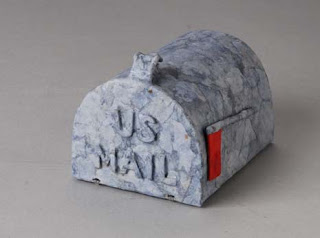 My husband was an angel. He couldn’t get in touch with me and didn’t know what to do, so he wound up having it turned back around to England at an exorbitant express mail price (a bit ironic, seeing as the subject of the piece is bills). It still arrived before the show opened, but too late to get its picture included on the website with the other entries. (However, you can download a catalogue of the show and you will see it there.)

At any rate, the moral of this story, artists and artisans, is choose your titles carefully. Otherwise, they might come back to haunt you.