One day in January in 1999 I looked out the window and saw a black cat running across the yard toward the house. At that time, we had four cats, including a semi-feral stray who’d suddenly appeared a month before and had moved in with us. She was a black cat with a round and compact sort of build. We’d named her Lila.

However, this black cat was long and sleek, with big ears and lanky limbs. This was definitely not Lila. I went out to investigate. The long black cat ran up to me and began to frantically rub against my legs, over and over again. (A friend who’d dealt with abandoned animals in his job later told me that dumped cats will do this. He was hungry and scared.)

My husband Victor appeared, saw the cat and exclaimed, “What is this? Lila’s cousin Larry?!” The name stuck. And so did the cat.

We weren’t really excited at the prospect of 5 cats, but what could we do? Larry would position himself at the back door and wail pathetically in a soulful voice that could be heard throughout the house. He had chosen us.

I think the moment I fell in love with him was when, a few days after his arrival, I saw him wetting his paw in the water bowl in the kitchen, then reaching up behind his ear to wash himself. I’d never seen a cat wet his paw for a bath before. He was adorable, this gangly, yet elegant-looking cat, dunking his paw and washing up after dinner.

There were quite a few things about Larry that weren’t like most other cats. He was so smart and had such an expressive voice, it was sometimes almost eery. He would talk at me and I to him. If I asked “Do you want to take a nap?” he would sprint to the bedroom and hop up to his spot on the bed, waiting for me.

Larry has been mentioned and given credit in at least a couple of my artist’s books, including A Cat’s ABC and Superstition, an edition I’m still assembling for Book Art Object. He was my feline muse.

He had beautiful eyes that changed color from green to yellow, depending on the setting. Through the years I used to tell him that it wasn’t fair, what he’d done to me. Someday he was going to cause my heart to be ripped from me, and I hadn’t gone out looking for that. He’d just appeared and made me fall in love with him.

The other cats who’d already been in residence before the arrival of Lila and Larry were older. Over the following years they passed on, and eventually we were left with the two black cats. Or, rather, we had his ‘n her black cats. Lila barely tolerated me but adored Victor. Larry barely tolerated Victor, but he and I were a bonded pair.

Four years ago, Dominic showed up in the yard, just as Larry and Lila once had. And then came Steve, a moment of kitten madness on my part two years ago. Larry grew old and was afraid of the vigorous and playful Steve. I felt guilty for doing that to Larry, the cat who was more a soulmate to me than a cat. But we still managed to all coexist.

Lila grew ill and passed away roughly a year and a half ago. We spent our 20th anniversary that December burying her in the garden. I realized that almost every photo I had of her was either of her with Victor, or of her sitting vigil waiting for him. Such sadness.

Larry’s sleek black whiskers all turned white. His heart began to fail and he grew frail. He was taking almost as many medications as we do. The last time we saw his regular vet, her face grew grim as she listened to his chest. “It won’t be long… months, not a year.” And she warned us to prepare for the likelihood of a sudden death.

I discovered that “sudden” is a relative term. A blood clot, it turns out, is not a particularly peaceful way for a cat to leave this world. My beautiful, smart and devoted Larry has died of a broken heart, and he has taken a piece of mine with him.

I’m behind with everything. Among other things, I’m still working on the BAO editions, which I’d absolutely planned to have done and mailed by now. Being chronically sick often means turning into the sort of irritating, antisocial flake I never planned to be. 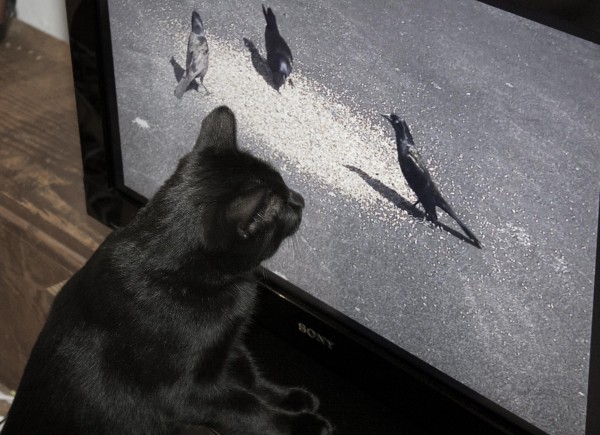 But I also had to take some time out to tame the studio a bit. I simply couldn’t work in there anymore. I plan to post some pictures later of my organizational progress. For now, I am getting back to assembling books. I’m currently folding … and folding … lots of pages.

I’ve also made a new banner and spiffed up the blog a bit, you might have noticed. 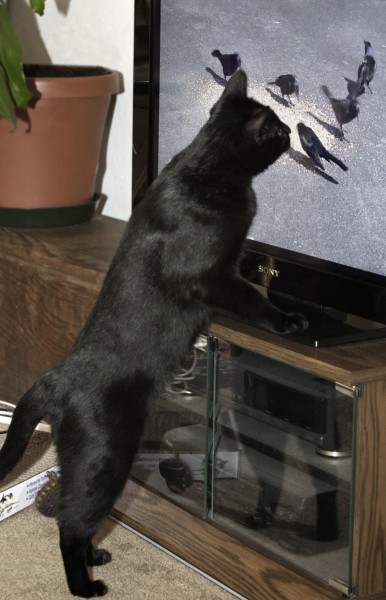 In the meantime, I thought I’d post a couple pics of my cat Steve. What else is the internet for, if not for cute cat photos? If you’ve been following for a while, you might remember that he came to us last year as a little 4-month old kitten. As you can see, he is now a strapping 12+ pound cat who loves to watch TV.

A few nights ago he sat mesmerized for a full half hour in front of a documentary about tigers (until the scene where a cub killed his first prey — then he went wild with excitement and started tearing at his feather toys).

Here, he is enjoying one of his favorite YouTube videos. What does this have to do with books or paper? I haven’t a clue. It’s just one of those cat lady things. 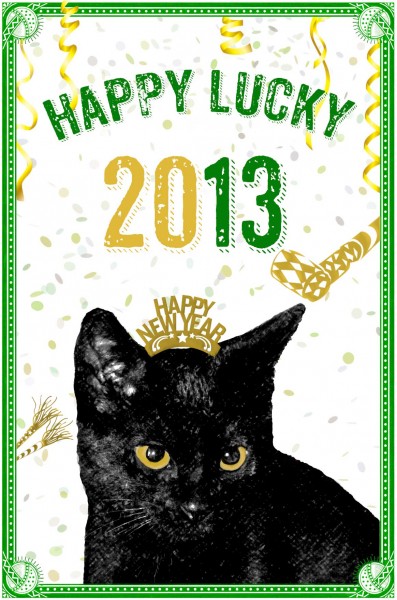 This is the front of a postcard I concocted in Photoshop for a recent exchange with friends in my local book arts guild, NORBAG. The lucky black cat is Steve the kitten.

The actual item was inkjet printed on plain old Strathmore Bristol which, surprisingly to me, sometimes works quite well for this purpose. And the printouts don’t scratch easily, as they do with coated papers meant for inkjet. It’s not suitable for everything — graphic-type pieces like this tend to come out best.